Delegation of Catalonia to Germany 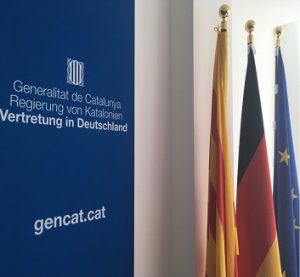 In January 2010 I began to work at the Delegation of the Government of Catalonia to Germany as a project manager – a newly created position, since the office had been opened short before.

One of my areas of responsibility was communication: I was in permanent contact with German journalists and media, and wrote press releases about political, economical or cultural affairs in Catalonia as well. I also conducted interviews and wrote articles for a monthly, bilingual newsletter.

I was also responsible for the organisation of activities, both in the fields of culture and politics. I was co-organizer of the popular cultural festival ‘Sant Jordi’ which takes places April 23rd, among many others.