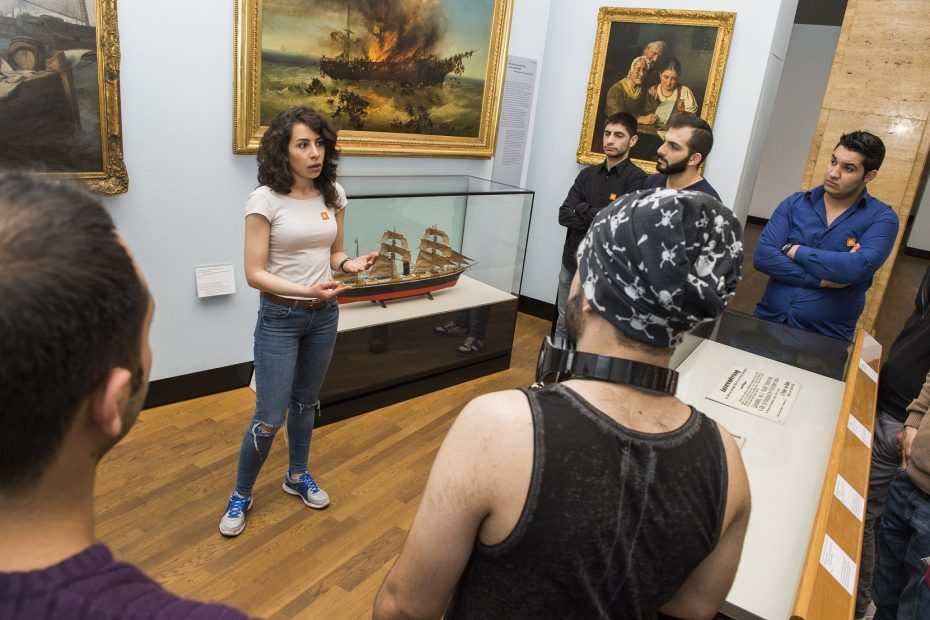 As an institution which is specialised in cultural history we stress the dynamics of cultural processes and developments: interconnectedness and exchange. In times of collective cultural uncertainty, we provide open, networked culture images (multi-religious, multi-ethnic, trans-regional, cross-linked).

We aim at our identities, which we see connected, plural, hybrid and inclusive. Crossing the boards of four museums we focused in our training on a broad grand narrative in which all are embedded. The emphasis changed in each museum, based on the collections: The guided tours in the Skulpturensammlung und Museum für Byzantische Kunst make reference to the inter-religious roots and the common origins of the three world religions of Islam, Judaism and Christendom. Cultures in the Eastern Mediterranean region were characterised over the centuries by religiously and ethnically plural societies, which today are under threat.

The displays in the Museum of Islamic Art and the Ancient Near East Museum are based on outstanding testimonies of human history from mainly Syria, Iraq, Turkey and Iran. Both museums provide many narratives of the migration of cultural techniques between Europe and the Middle East, the plurality of societies or of the cultural interconnectedness in each époque until today (see below). The tours at the Deutsches Historisches Museum connect these cultural experiences with their new home.

By the way: the majority of the guides from Iraq and Syria have chosen this museum as their preferred place of work. Through the depiction of such commonalities and the incorporation into a larger cultural and historical, epoch-transcending narrative, museums have the immense opportunity to function as a connecting link between the refugees’ countries of origin and their new host country, in order to create a context of meaning for their lives here. In our case we are happy to have the grand narrative through the four museums very close by. However, there are key narratives that function anywhere:

Migration: No object in our museums exists without migration – every object is an expression of transregional connection and migration: the exchange of techniques, thoughts, pattern, fashions, and ideas is the base of each narrative. No object and no subject in our society can be explained by rigid culturalistic maps. Where does iron come from? Or where does the alphabet come from? What about paper, gunpowder, the telephone, your jeans? Look at our lives: they are all about migration (and trade). No single thread of our cloth is pure and only German, Syrian, and British etc.

Shared heritage: The specific history of exchange of our cultures and what came from the Middle East may help to understand that none of us would be as he is without the other. The list from the Middle East is long: science, philosophy, ceramic techniques like luster and blue white, paper, the game of chess, the oud as mother of the modern guitar (without the oud no Jimmy Hendrix or John Lennon) etc. It is a long list also the other way around. Many cultural realities are interwoven and both sides of the Mediterranean were formative for each other over very many centuries.

Common threads in history: what are the common historical experiences? For example, the birth of our cultures from late antiquities or the drastic change of patterns of life during the 19th and 20th century modern period are closely interconnected phases of our developments. They are not the same but they are entangled. Parallel and connected histories of human experience could focus on specific topics on a meta level like, love, war, living, social order etc. on structures of interactions like trade and war (the Silk-Road or the Mediterranean).
Contact zones: historical and cultural connections between Germany, Syria and Iraq. Exchange from that period of Carl the Great and Harun al-Rashid, the Staufer Frederic II and Sultan Kamil, Wilhelm II and Abdülhamid II. The heritage of Islam in Europe in Sicily, Spain and the Balkans. Court culture along the Mediterranean in the 12th/13th C. etc. Venice and the trade with the Middle East. The Crusaders as culture transfer etc.

Identity: By discussing the experience of discovering the intercultural networks of objects, often self-awareness may arise in the assessment of visitors’ own cultural identity. In times of social uncertainty and increasing culturalistic exclusion, cultural pluralism can be seen as a positive development. Objects from the past then function as reflective spaces and allow for the negotiation of collective identities. How were ideas in art, music, science and history exchanged over the centuries? Where are our origins? We give concrete examples and unusual answers to the question of “who am I and who are you”. We are in urgent need for that given the raising phenomena on excluding right-wing populism or religious fanaticism.